Stoking the Embers: Smoke and Mirrors

By CB Mako
With the generous assistance and feedback of Gemma Mahadeo and
Hannah Morphy-Walsh, founding members of the Disabled QBIPOC Collective.

Thick smoke heavily blankets several cities across the country. Ash-white, smelling of burnt wood, like stepping in front of the raging barbecue grill but unable to step out of it – trailing and draping us like a shroud. We can’t take decent gulps of air. The permeating smoke of bushfire digs deep into our nostrils, shoves its way down our throats, blocks our lungs. The smell of burning forests clings to our clothes, our black hair. Dense and pervasive, this is no ordinary fog or smog.

Three different sets of masks are spread across the folding dinner table. Within a span of a week, we quickly learn about face masks – the difference between a P2 and an N95, like some secret, coveted code; whispered because, when said aloud, the masks would become out of reach, unavailable, out of stock.

On social media, we’re glued to streaming videos of bushfires. They move like sentient beings, with their own atmosphere, behaviour, swirls and dances, travelling voraciously along their paths. Live, visceral images of wave upon wave of fiery red flames, flying embers, from multiple and vast areas of land – unceded, stolen Aboriginal land.

Our collective keeps in touch online via instant-messaging apps. Spread across Narrm, the lands of the Boon Wurrung, Woiwurrung and Wurundjeri, we bombard each other with questions, worrying for one another’s safety.

‘Where did you get yours?’

‘I got mine all the way in Hoppers Crossing’ (accompanied by a photo of their mask sealed tight across the lower half of their face).

‘Are you near the bushfires?’

‘Do you have an escape plan?’

‘Do you need a place to stay?’

‘Do you have enough batteries for your hearing aid?’

‘Do you have enough medication?’

‘Thank goodness asthma puffers didn’t need prescriptions,’ one of us adds. Another whimpers that their eyes sting and are red from the smoke and haze – that they have itchy hives swelling on brown skin, arms and legs splotchy.

While sharing web links to news and videos of bushfires, we realise there is a singular narrative projected on news feeds. Journalists and camerapersons on roving vehicles or in the air in helicopters, alongside real-time visuals of the devastation, report on the speed and spread of the bushfires. Except these people are all white and abled, mirroring the erasure of everyone else from their narrative.

We are constantly reminded that one in five Australians report living with disability, and that a quarter of Australians are born overseas, but where are the disabled Black, Indigenous and people of colour (BIPOC) residents and members of the media? Why are there no captions on the news feeds? Why do some of the sudden press conferences and announcements not have Auslan sign-language interpreters? How do people with non-English-speaking backgrounds or who are considered ‘culturally and linguistically diverse’ access information?

We write this essay while bushfires still rage and muddy, red rain falls from Melbourne’s skies. As the mainstream media blazons through bushfire emergencies, an online fundraiser, Fire Relief Fund for First Nations Communities, is one of the first to go viral and reach its goal amount – breathtakingly quick compared to other fundraisers in progress. Yet reportage continues to fail to reflect the broader population’s statistics.

Barely a month before the news about the bushfires broke on television, one member of our collective spoke on a panel entitled ‘Leading the Charge: Climate Change, Disability and Storytelling’. ‘We are not climate experts; we are storytellers,’ they declared. Our aim was to include disabled BIPOC into the narrative of climate change. ‘Before there were words or labels like “climate crisis” or “climate change”,’ our member continued, ‘we were already experiencing climate change’ (you can learn more about this via this ABC News report from 2019).

In preparation for the panel, we researched articles about climate change. Most of the panellists would refer to the then-recently-published United Nations report or provide examples of catastrophic events overseas. This research happened throughout November 2019. The moment summer began, in the following month, a deluge of articles about climate change appeared online: on news sites, as op-eds, as blog posts, as long-form essays. Researching post-panel insights suddenly became… easier.

When the smoky haze descended on Melbourne’s suburbs, one of us had a sense of déjà vu. This was not the first time they have seen this type of heavy, dense smoke. That other time, it was in another colonised country – on the edges of the Pasifika, where colonisers built industrial factories and big-brand companies dumped their capitalist-led, consumerist-driven waste into waterways and into the atmosphere through tall, large chimneys. Acrid smoke also came from burning forests from a neighbouring colonised country, where massive deforestation paved the way for palm-oil plantations.

By the second month of summer, the Royal Children’s Hospital had uploaded a very calming but very important video about bushfire smoke and haze. The message was loud and clear, burned into our memory: ‘Stay indoors, especially parents of children with underlying conditions.’ While the doctors attempted to project a calm demeanour, the video – and the conversation around it that followed – was filled with anxiety and trepidation. Like bushfire smoke, eco-anxiety spread like wildfire, the worry apparent on messages from multiple social-media platforms.

‘This is why I don’t watch films and movies much,’ one of our collective admitted. ‘I’d rather read books.’ Falling within the autism spectrum, they have found that watching audiovisual material like the local news affects them so much; their mental health plummets, while already amped up on antidepressants and SSRIs.

Meanwhile, as firefighters battled flames across different states, another member of our collective was fighting an uphill battle with bureaucrats. The vehement climate-change denial of Prime Minister Scott Morrison and his Coalition government trickles down to affect other government departments and agencies. Of particular interest to us is the National Disability Insurance Scheme (NDIS). Despite hashtags such as #ClimateChange, #ClimateCrisis and #ClimateEmergency trending online, a concerted effort to protect the most vulnerable – the future generation, the marginalised and the disabled – by those who supposedly lead us seems to be lacking.

That member of our collective had applied for NDIS assistance to keep their home’s temperature and air quality more bearable as they and their children stayed indoors during the heatwaves and bushfires. Their requests were simple: block-out blinds, and landscaping to stop dust from flowing into the house and to prevent allergens from spreading throughout the property. The NDIS did not approve any supplier quotes to improve their daily living. Was the NDIS designed to cater only for privileged disabled homeowners? After all, demanding bare-minimum requests for housing contributes to the mitigation of rent rises for low-income households, and safe, secure housing is a fundamental part of illness recovery.

So they e-mailed their local federal MP to ask for support. When someone is disabled, battling bureaucrats can be distressing – and this was intensified as, around us, Melbourne temperatures soared. A simple ask: help to make sure their long-term private rental home remained liveable during conditions occurring as a result of climate change. In the end, their request for a review of the NDIS outcome was denied. It’s frustrating that we stoke the embers with our advocacy, only to be faced with smoke and mirrors.

‘Face masks are not covered by the NDIS,’ suggests an e-mail received by one member of our collective when they attempt to purchase face masks from an NDIS-accredited website. When a friend drops by to offer an extra face mask, we discover the P2 mask is too big for a tiny child who was recently diagnosed with protracted bronchitis. Remembering that the Royal Children’s Hospital has an Equipment Distribution Centre, we ring and are surprised by the reply: ‘We have no P2 masks in children’s size. We only have kids’ masks that are EN14683 – 11R, ASTM Level 3.’ This is the type of face mask worn by kids who are immunocompromised, like the cancer patients in the Kookaburra ward.

By the time the new school year starts – with temperatures soaring to 39 and 43 degrees Celsius – none of western Melbourne’s local public schools have provided parents with information about sending children home early or advice about non-attendance.

‘Did you know it took us almost a year to be seen by the asthma clinic?’ A new message pops up in our collective’s group chat. ‘Only when we asked for a chest X-ray from another department, the Ear, Nose and Throat (ENT) clinic, where a brilliant, empathetic ENT doctor who was also a woman of colour. When the results arrived, only then were we rushed to the asthma clinic.’ We proceed to lament about old, white, male doctors mansplaining and whitesplaining to BIPOC parents with disabled and chronically ill children. We talk about how, similarly, a supposed provocateur – another old white man – recently claimed that ‘warming is good for us’, all while NDIS funding was being ‘repurposed’ for drought relief at the same time that NDIS was being rolled out in Melbourne’s western suburbs.

In 2020, the NDIS funding allocated to one member of our collective was significantly lower than their first NDIS plan in 2019. Having survived the bushfires and now emerging from COVID-19 as disabled QBIPOC, we are reminded of what this land’s original owners have lost and what they continually mourn for; we are reminded of more dust, head and mud rain. We are reminded that the city of Melbourne – once one of the world’s most liveable cities – is getting hotter due to climate change. 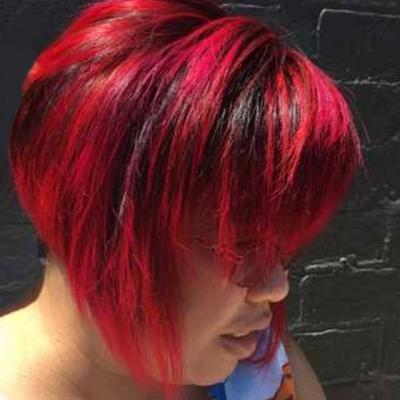 CB Mako is a founding member of the Disabled QBIPOC Collective. A winner of the Grace Marion Wilson Emerging Writers Competition, shortlisted for the Overland Fair Australia Prize and long-listed for the inaugural Liminal Fiction Prize, CB has been published in ‘The Suburban Review’, ‘The Victorian Writer’, ‘Peril’, ‘Djed Press’, ‘Overland’, Liminal’s ‘Collisions’ anthology (Pantera Press, 2020) and ‘Growing Up Disabled in Australia’ (Black Inc., 2021). They were nominated and received a medal of recognition at the 2020 Aspire Awards.